Here’s what’s going to happen when the food comes to the table: everyone is going to whip out their phones, take pictures of the plate from every angle and then tweet and Instagram.

No one understands the art of dazzling the customer better than Masala Library’s Zorawar Kalra. At Pa Pa Ya, Kalra’s newest restaurant, he has applied the same dramatic molecular gastronomy techniques to Asian food, with a bit more flair.

Wise Whiskey, a rosemary-foam topped whisky and Angostura bitters cocktail, is served in a conical glass sitting in another glass, from which a nitrogen-chilled, rosemary-scented cloud floats out. Lighthouse, a sweetish lemongrass-infused vodka mixed with pineapple-orange juice and galangal syrup, is served in a light bulb-shaped glass and has a rasta ganna and ginger juice-like appeal.

Two dishes towered over the others. The gluten-free vegetarian edamame sliders were a surprise. A crunchy falafel-like edamame-and-chickpea patty was sandwiched between a soft and airy lotus flour bun, and the sliders were served on the overhead carrier of a miniature Humvee-looking jeep. Our other favourite was the Malaysian ikar bakar: boneless cubes of charcoal-grilled red snapper, deep fried in a crushed peanut crust, arranged on a hollowed-out whole fish and served with a velvety, spicy nyonya curry.

While most of the food tastes as good as it looks, there are a few wrinkles. For instance, in the pork belly butayakitori skewers, the fat was juicy and moist, but the meat was a tad stringy. The accompanying apple and betel leaf tartare sauce was an innovative idea, better suited to a more lightly flavoured meat. With a topping of a crisp parmesan tuile and paper-thin bonito shavings, the chorizo takoyaki packs a delightful umami punch. Unfortunately, the strongly flavoured chorizo simply overwhelmed the grilled octopus.

For the chocolate ball of fire, a glass of flaming aniseed rum is poured over large chocolate ball. The flambéed ball melts to reveal a filling of yuzu chocolate, vanilla ice cream and cheesecake. Though the aniseed dominates, the tart yuzu and the mellow vanilla bring a soothing balance to every boozy spoonful of molten chocolate. 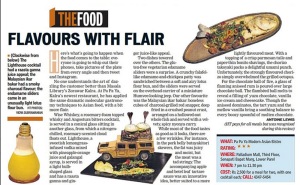 Seven Kitchens @stregismumbai has had a makeover; not complete, but visibly different from earlier.
To the two mutts who make pillows out of freshly washed clothes, scratch my upholstery, steal my sheets when I get up to pee in the night and take up half the bed.
Slightly Debauched Scrambled Eggs
What's in a name?
I haven’t quite made up my mind about these aged Negronis at Sette Mara @stregismumbai which are the only classic versions of the cocktail on the Middle Eastern kitchen and lounge’s signature Negroni menu.
When you haven’t eaten out for a while there’s a higher expectation of that first meal. It’s not enough for it to be good in itself, it has to make up for those lost meals and be like boni for meals to come.
Sometimes, a new recipe simply evades you. No matter how hard you try it just doesn't produce the right flavour, or texture.
About a week ago I brought Sahxy nee Sakshi, from @wsdindia.