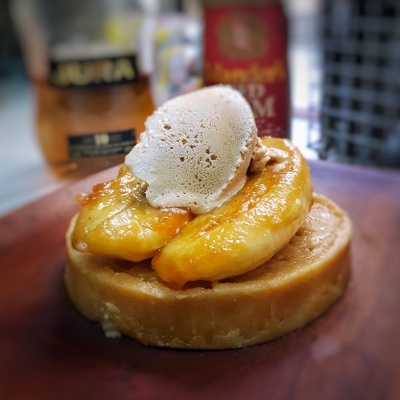 I don’t have a sweet tooth.

My refrigerator is a purgatory for desserts, chocolates, mithai and other sweet things. Visiting family and friends have learnt to bring bacon instead of candy.

But there’s not much I can do to stop the waves of confections sent across on festive occasions, particularly Diwali – that would be professionally discourteous. So I make my way through them, a nibble at a time, usually managing to make a dent before the start of summer. But this year I have been particularly severe with watching my waistline and thus there is still a large box of Mysore Pak sitting in the fridge since Diwali. (The equally large box of Jangri – one of my few weaknesses – got demolished quickly)
And as much as I like Mysore Pak there’s only so much I can eat; I needed to do something interesting with it. Boredom is the mother of re-invention and this was the perfect opportunity to re-imagine this South Indian sweet.

Sudip Putatunda who runs Koldplay Ice Cream is my kind of guy. (You’ve probably never heard of the brand but if you’ve eaten ice cream at any five-star, or any upmarket restaurant in Mumbai, chances are it was made by him.)

He’s always experimenting with unusual flavours, fastidious about the quality of ingredients and obsessive about hygiene. And because he runs his own factory he can produce a test batch for himself whenever he wants. About a year and a half ago he sent me samples of some of his more playful, offbeat flavours. I remember devouring the motichoor and making my way through a nolen gur. The wasabi was smooth but too spicy and the miso, creamy, but too salty. Both got pushed into the back of the cavernous freezer.

They’d have remained there if the lock down hadn’t precipitated some house keeping and stock taking.

I won’t labour over the aetiology of the recipe but should this ever make it to restaurant menus I have a very interesting origin story. Anyway, suffice to say a video by Dominique Ansel for caramelised bananas convinced me that I had found the missing piece.

So there you have it.

A sweet, crunchy-mushy rum flavoured layer in between.

A soft, crumbly, sweet and a touch salty Jura-flavoured Mysore Pak base at the bottom.

There’s really not much of a recipe to offer since I’ve just assembled it, but here goes.

Mash 75 gm Mysore Pak with about 1½ tsp Jura or any smoky whisky till smooth. Place ¼ inch ring mould (the one used for eggs or pancakes) on butter paper. Press down the Mysore Pak into the mould. Refrigerate for about an hour or until hard. Run a sharp knife around the edges of the mould to pry the base away. Remove gently. Leave for another half hour in the refrigerator.

Prepare some hard caramel only with sugar. Flavour with about a tbsp of rum.

Cut a banana into two. Cut further lengthwise. Dip the cut side into the hot caramel. Cook for just a minute or two. Remove. Place on a wire rack, caramel facing up. When cool chill.

Arrange as in the photograph.

When you haven’t eaten out for a while there’s a higher expectation of that first meal. It’s not enough for it to be good in itself, it has to make up for those lost meals and be like boni for meals to come.
Sometimes, a new recipe simply evades you. No matter how hard you try it just doesn't produce the right flavour, or texture.
About a week ago I brought Sahxy nee Sakshi, from @wsdindia.
I've been wanting to make an Egg Salad Sando for a few weeks, but wasn't sure if anyone was making Shokupan, or Japanese milkbread in Mumbai.
I'm so used to cooking from scratch that I'm genuinely bad at cooking from a packet.
Man these mango-flavoured mithai from @bombaysweetshop were so good I nearly had the whole box as dinner!
In May, do what the Gujjus do: eat lots of aam ras. And in Mumbai I haven't eaten a better aam ras than the one at @shreethakerbhojanalay.
Had an excellent meal this weekend thanks to my old friend @gogikohli. He and his son @jai_1496 have launched @ginkgomumbai a new Pan Asian home delivery service in Mumbai.