April 17th has special significance for Argentina. No, it’s not Maradona’s birthday, nor is it the Argentine National Day.

On April 17th 1853, Argentine President Domingo Faustino Sarmiento undertook a step that would ultimately transform the country into a wine producing superpower. He submitted a proposal to to the Provincial Legislature to broaden and diversify Argentina’s wine industry. To accomplish this goal he entrusted Michel Aimé Pouget, an agronomist, with bringing new vines and varietals to the country. Among the many grape varieties that Pouget introduced was Malbec, a French varietal from the Cahors region in South West France also used regularly as a blending grape in Bordeaux. Malbec adapted quickly to the varied terroirs creating wines widely superior than those of its country of origin. Today there is much, much more Malbec made in Mendoza, the primary wine-making province of Malbec where 65,730 acres, or almost 85% of all vineyards are dedicated to Malbec, than in Cahors.

The proposal and the introduction of Malbec changed the fate of Argentine wine. So it was only natural that Wines of Argentina, an organization that promotes the Argentine wine worldwide, chose this specific date when it launched World Malbec Day in 2011. “April 17th not only represents the transformation of Argentina’s wine industry, but it is also the starting point for the development of Malbec as the iconic variety and international flagship of Argentina’s viticulture,” they explain on the website. 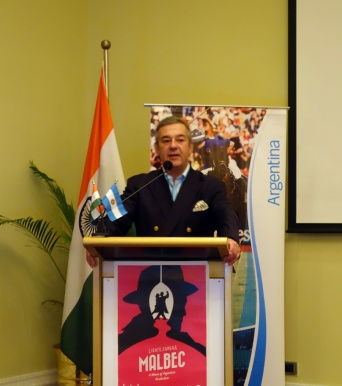 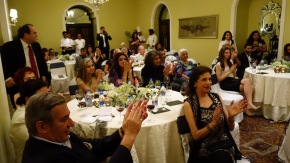 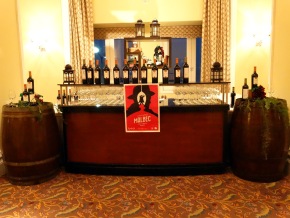 A display of Argentine wines

This year, along with 64 cities and 50 countries around the world, Mumbai also took part in the celebrations. Organised by The Consulate General of Argentina at the Taj Mahal Palace, the fifth edition of World Malbec Day, was celebrated with an intimate gathering of friends and business associates of Consul General Tomas Ferrari and his wife Nhu Anh Nguyen

Unfortunately, Malbec is not easily available in Mumbai and only two wines were served through the evening: Misterio, a seductive medium-bodied with aromas of dark berry and toasted vanilla and Urban Uco, a dark, rich wine with hints of dark chocolate and cherries. Both wines were naturally from the Mendoza region

Speaking on the occasion, the Consul General said, “Argentina has a reputation of producing the finest wines in the world, especially with the ever-increasing popularity of the Malbec variety. The Argentine wine industry is growing each year, adding acres to vineyards, improved technology to wineries, and innovation in the wine varieties.” He added, “Mendoza has become one of the major provinces, which attract globetrotters to the popular Argentine Wine Tasting Circuit. The famous wine routes extend over 2,400 km along the foothills of the snow-capped Andes and enthrall with its numerous adventure activities.”

The exquisite Tango performance that followed the speech had the audience completely floored. The dancers who had come prepared for a single performance were  cajoled into a second one.

Selling wine is a difficult business anywhere in the world, but even more so in India, events  like World Malbec Day which to help promote knowledge and awareness of wines are welcome marketing strategies that help the wine industry to grow. Hopefully, in the years to come it will become as grand and popular an event in Mumbai as Beaujolais Nouveau Day – the biggest wine celebration in the city.

Follow Antoine Lewis aka The Curly-Haired Cook on WordPress.com
Join 216 other followers