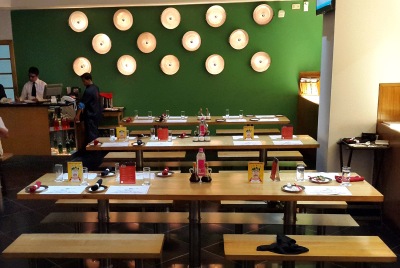 Built by an enterprising Englishman Arthur Gordon, Gordon House was a residential building till it was taken over by Mars Hospitality and turned into a boutique hotel in the early noughties. The brainchild of Sanjay Narang, the hotel opened with two restaurants – a seafood restaurant Tides and the oriental All Stir Fry.

Despite the enthusiastic endorsement from former Miss Universe Sushmita Sen, Tides, with its deep blue, subterranean interiors and pointless menu floundered. The bright, cheery, somewhat minimalist All Stir Fry was a success from the day it started; Tides was quickly gutted and incorporated into its more successful sibling.

The difference is quite discernible in the décor: the entrance opens up to the original Wagamama-influenced restaurant with its polished wood tables and benches; on the left, where Tides used to be, are granite topped tables and icy-cold granite bench seats.

All Stir Fry caught the city’s imagination by introducing a relatively unknown concept: the all-you-can eat Mongolian barbecue bowl developed in Taiwan in the 50’s and popularised in the 70’s. (I remember eating at a restaurant in Pune with a similar concept in the late 90’s). In this form of service diners select their meat and vegetables from a display and fill them into a bowl. They then give the bowl to the chef who cooks it on a teppan-style griddle in the diner’s choice of sauces.

At All stir Fry they introduced two important changes: the griddle was substituted  with the wok, a form of cooking Indians are more familiar with (at that time there were no Japanese restaurants in the city), and they included a selection of noodles.

The Quick Wok was a refreshing interactive experience: instead of passively accepting what was available on the menu diners could now customise their meal.  They could decide what vegetables meats, seafood and noodles went into the bowl and after they informed the chef about which sauce they wanted, they could watch him cook the meal inside a glass-walled display kitchen. Being a buffet, it meant they could return several times which gave them a chance to try out as many combinations as they wanted. 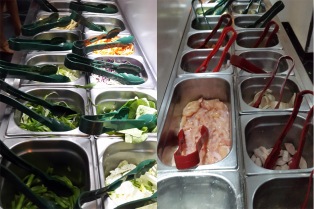 I’ve always liked The Quick Wok at All Stir Fry: there’s a generous choice of Asian and Indian vegetables, chicken, some very good quality squid and prawns, cooked mutton and some avoidable sausage; they used to serve beef earlier, but not pork. The spicy sauces are seriously pungent and I rarely ever order two spicy sauces in my sequence of orders; my favourites are the sweet chilli, Hunan, ginger oyster and sweet lemon. The only deterrent has been the price which at Rs 730 + taxes is not exactly cheap.

Don’t expect the Wok to be a superlative experience, most of the time the meats and vegetables are overcooked and they’re doused in sauce. However, the combinations have been reasonably well-thought of and the end result, depending on what you chose to include, is usually tasty and colourful. The chefs too are quite friendly and if you have any doubts about the suitability of the sauce with your bowl, it’s best to consult them. 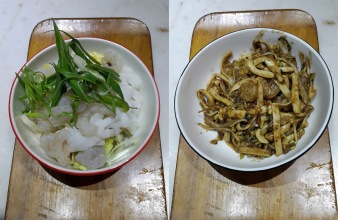 Prawns and Squid with toppings

However, I always feel a pang of disappointment that the carefully constructed, almost spilling over the brim, bowl of ingredients that I’ve handed to the chef is substantially diminished when he returns it back to me.

The partner-in-dine often skips the noodles and transforms it into a stir fry. One of the hacks I learnt from her is to garnish the bowl with some of the raw vegetables – I top mine with spring onions and omelette strips so that it looks more visually appealing.

They also have a full a la carte and dimsum menu which I think I’ve tried only once before.  On my last visit I ordered the Cambodian Prawn Soup and quite liked the gentle pepperiness of the broth and the fact that the beautiful fresh prawns were perfectly cooked.

All Stir Fry is also a very child-friendly place and most weekends the place gets unbelievably crowded and noisy.