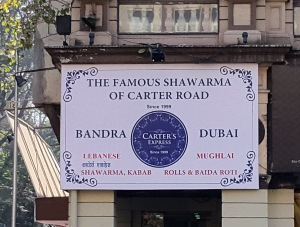 Carter’s Express, which opened on 31st December in the space previously occupied by Café Moshe’s, is a branch of the re-branded Carter’s Blue chain, launched by Mezbaan on Carter Road. Mezbaan (popular for its mid-priced Mughlai food, shawarmas and rolls) and Café Coffee Day, as anyone familiar with Carter Road knows, have been two constants on an otherwise capricious stretch of restaurants.

Their Colaba location too has not seen much turnover. Before Moshe’s opened in early 2009, it was occupied by New York, a non-descript Irani tea shop that had been running for a few decades and which was popular with drivers and office support staff. 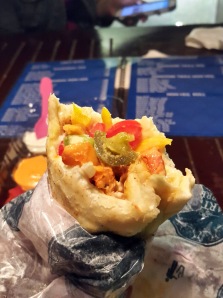 Since the kitchen is not fully operational Carter’s Express has only been serving shawarmas, rolls and snacks.  Their strength is their shawarmas whose meaty fillings are far more strongly flavoured than those served by most other places. The chicken shawarma (Rs 120) for instance has a thick masala-ish coating, while the sour-sweet masala for the mutton shawarma (Rs 200) was distinctly reminiscent of the mutton filling in a Frankie. Incidentally, Carter’s Express is the only place serving a mutton shawarma in Colaba. I decided to be a little experimental and tried the chicken Mexican shawarma; the Mexican element – juliennes of red, yellow and green pepper and sliced pickled jalapeno actually worked quite nicely in the filling with the jalapeno providing a sharp spicy burst every once in a while.

Carter’s Express uses a special kind of bread for the shawarama which is somewhere between the soft, doughy khaboos and a plain pita. The result is a very tasty roti-like bread, with a slightly toasty, crisp exterior and a soft interior. All the shawarmas and rolls are served with a slightly sweet garlic mayo, a tomato-chilli mayo and pickled vegetables.

The Pahadi tikka roll (Rs 120) turned out to be a big disappointment. Overcooked, dry chicken coated in a pungent coriander-ginger-green chilli masala wrapped in an equally dry and hard roomali roti did not make for a pleasant experience.

The full menu will be available from the 15th onwards.

5 replies to “A quick meal at Carter’s Express”