Urdu daily Inquilab is out with a unique set of four cookbooks that share recipes stirred up in Memon, Bohra, Kashmiri and Konkani kitchens 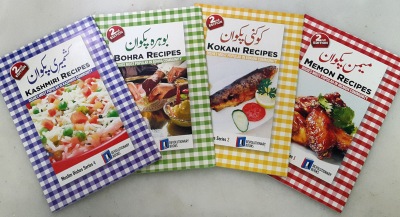 Of the hundreds of cookbooks released every year in India, few are devoted to community-based recipes. Within this category, Muslim cookbooks are almost non-existent. While it’s possible to find titles on the courtly cuisines of Awadhi and Hyderabadi, which arguably are Muslim in their style, these hardly represent the food of ordinary people.

Mughlai, another style whose recipes are easily found, is essentially a restaurant cuisine that has no bearing on the domestic kitchen. Some degree of representation can be found in regional cookbooks, but given the number of communities that need to be incorporated, it’s unreasonable to expect or even find adequate coverage.

Though it’s quite possible that there are some published in Urdu, the only community-specific cookbooks available in English are Fatima Hooda’s slim Khoja Khana and Ummi Abdulla’s Malabar Muslim Cookery. That is what makes Inquilab’s newly released collection, Muslim Recipes, comprising a set of four booklets, each devoted to a different cuisine, a welcome initiative.

While two are focussed on a specific community — the Bohras and the Memons — the remaining two are on Konkanis and Kashmiris; both, more regional in their approach. Of these the Bohra, Memon and Konkani are particularly interesting as none of these have ever appeared in print in India before.

What unifies the collection is that all four books are centred on home-style recipes (although the Kashmiri booklet does have a few preparations like Rishta and Goshtaba that are typical of the Wazwan feast) that are unfortunately never found on restaurant menus. The collection is meant primarily for an Urdu readership since the books, though bilingual, have the introductions and index only in Urdu.

These are not an exhaustive collection of the community’s recipes, but the most popular, as the subtitle quite clearly points out. What is popular is not necessarily traditional especially for the urbanised Bohra and Memon communities.

Both include a touch of modern Chinese and Western-influenced recipes, two cuisines that have quite successfully been incorporated into our regular meals. In the Bohra cookbook, recipes for Fanta Orange Ice Cream, a very Chinese-influenced Chicken Ball and Suki Yaki soup can be found side-by-side a more traditional Dal Chawal Palido, Malida and Paya Keema Khichdi.

2 replies to “What’s cooking in a Bohra kitchen?”

Seven Kitchens @stregismumbai has had a makeover; not complete, but visibly different from earlier.
To the two mutts who make pillows out of freshly washed clothes, scratch my upholstery, steal my sheets when I get up to pee in the night and take up half the bed.
Slightly Debauched Scrambled Eggs
What's in a name?
I haven’t quite made up my mind about these aged Negronis at Sette Mara @stregismumbai which are the only classic versions of the cocktail on the Middle Eastern kitchen and lounge’s signature Negroni menu.
When you haven’t eaten out for a while there’s a higher expectation of that first meal. It’s not enough for it to be good in itself, it has to make up for those lost meals and be like boni for meals to come.
Sometimes, a new recipe simply evades you. No matter how hard you try it just doesn't produce the right flavour, or texture.
About a week ago I brought Sahxy nee Sakshi, from @wsdindia.