At school, Shazad Kadkhodai used to get lunch from his restaurant every afternoon.

Like some children, he would angrily complain of having to eat the same food every day. I would be aghast when I heard him complain. ‘How can you not like it?’ I demanded. I love the food at Paradise. Unlike him though, I didn’t get to eat in Paradise everyday.

We ordered from Paradise only when my father invited Fr. Benny Aguiar, a family friend and the only priest he knew at the Wodehouse Cathedral, for dinner. If I remember correctly it was a standard order: two plates of beef steak with potatoes and one plate of mutton cutlets with potatoes. I so looked forward to having Fr Aguiar over. Initially, my mother would pick up the food from the restaurant that was a two-minute walk away. Later, it was my responsibility, after my father taught me how to tip the waiters. The food would be packed in aluminium foil containers and each container would go into a crisp, brown paper packet neatly stapled at one end. (I don’t remember Paradise ever using plastic bags). ‘Hold the packets flat, beta’ Jimmy Kadkhodai would always tell me – for the next 15 years.

While the cutlets and the steak had its fans the most famous dish on the menu was the chicken roll. It was, and forever will be THE BEST chicken roll in Mumbai. I know, because I did a taste test, comparing rolls from Sunshine Corner, Grub Corner, Hearsch, Andorra’s, Theobroma, St Stephen, Chickita and a couple of other snack counters in the city. (The irony is I have photographs of every roll except the one from Paradise. I took it for granted and didn’t bother to ever take a picture). But I do have a copy of the 90’s menu! The price of the roll when they shut down was Rs 150. 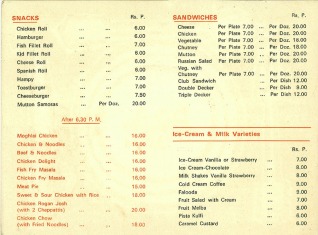 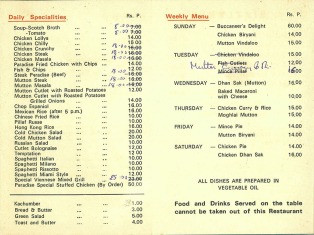 Nothing, nothing compares to the Paradise Chicken Roll. Firstly, it was made to order. It wasn’t pre-prepared, sitting in a fridge wrapped in plastic wrap. Secondly, every element was quite different from other mass-produced rolls: the bread was fluffy, soft and sweet, you could actually taste the crunch of the lettuce, the chicken, I suspect had been roasted and not plain boiled. But the most important thing about the roll was the mayonnaise. No one, not even the French made a mayo like Mehru Kadkhodai. She put a loss less acid in it, so it was lemon, almost golden, yellow, sweet and sharp – somewhere between a mayo and sweet relish. There was an architecture to the roll: the shredded chicken would go in first and on top of it would be poured slightly runny mayo with lettuce leaves till the roll was bursting at the seams. At home, I would take a knife and push in the mayo and when eating take care never to let it drip from the bottom.

My next favourite was the fish roll, which was crisp pieces of batter fried fish topped with a version of Russian salad. No one does this anymore.

Then there was a the Chicken Masala; a fiercely red, smooth and thick chicken curry with two pieces of filet of breast. It was as pungent as it looked and you’d break out into a sweat by the end of it. Over the years, I found the quality of the beef steak deteriorate and I stopped ordering it more than a decade ago. Towards the end I found more gristle than I cared for and the pieces of tender steak were gradually growing smaller. My go to order became the mutton cutlets with roast potatoes, I never paid the extra twenty for grilled onions. These were two large, thick mince cutlets, each about the size of a coaster, with a crunchy coating of breadcrumbs, that had been pan-fried and were served with a shiny, translucent brown sauce. It was filling and familiar.

There was a brief phase were I ate nothing but the Temptation at Paradise. No apples were hurt in the making of this oversized, bread pakoda with a filling of shredded mutton and served with a sweet-tangy pumpkin sauce. 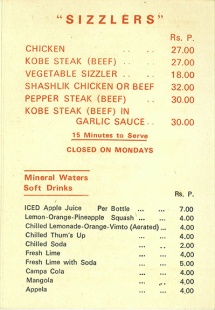 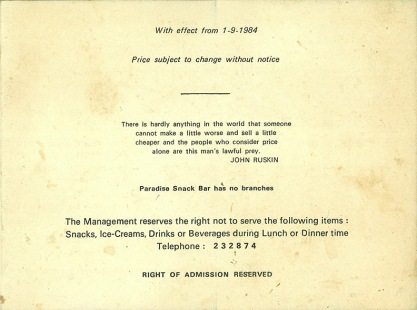 Apart from the menu, the other element that stayed constant was that the service staff. It made such an impression on me that for a story in the December 2008 issue of TimeOut Mumbai I wrote: At Paradise, Mrs Mehru Kadkhodai treats her staff like family. “My husband and I didn’t want to take on a partner, so we treat our staff as partners.” Most of her waiters were with her from the time they opened the restaurant. Since then most have retired or passed away though Pudanik Naik and Boju Poojari have been with Paradise for the last 30 years.

Paradise’s fame was inextricably linked with that of Colaba. In the 60’s and 70’s people from across the city came to Colaba Causeway to shop. It was the only High Street in the city. They came to Regal and Strand cinema to watch English films. The neighbourhood was filled with young couples and their children. Fifty years later the ones that aren’t pushing up daisies, are either ailing or on restricted diets; the older Parsi clientele from Cusrow Baug still troop in faithfully, and I’ve seen Mr Tata waiting in his car outside for his order.Young people have mostly given it a pass: there are far too many dining options in South Mumbai now, and this old-style Continental cuisine has few takers. The Kadkhodias didn’t do too much to make themselves relevant either. They introduced a god-awful Chinese section along time ago and the entire restaurant has been air-conditioned for a little over a decade. With all three children living abroad, I guess they too knew that they’d shut shop sooner or later and have been looking for a buyer for a while. It’s also been shut for long stretches.

And while I’m sad about the closing of Paradise, I can’t say it’s a terrible blow. It’s more like hearing about the passing of a distant relative whom you have fond memories about but haven’t been in touch with from the time your hair was naturally black.

For now all I can say is Thank You for the rolls and for making place in Paradise for Mario Miranda’s triptych of the Original Sin.

One reply to “Remembering Paradise’s Chicken Roll and other Temptations”