Mornings are always better with bacon and eggs. And sausages.

Well, mine at least. I make do with fruit and toast, but when I need a good morning then it’s got to be bacon and fried eggs.

The last fortnight I’ve had some very good mornings thanks to a serendipitous meeting with the dapper Manjunath Marappan of The Happy Hens Farm, a free-range, poultry farm in Trichy, Tamil Nadu. He was in Mumbai a fortnight ago displaying his eggs at Karen Anand’s Farmer market at Phoenix Mills, Parel. His stall was coincidentally next to Ishka Farms, which is in neighbouring Tuticorin and run by my friend Fiona Arakal and her husband Srikanata Suryanarayan. Introductions were quickly made and Marappan gave me about a dozen eggs to sample.

Marappan eggs could not have come at a better time. Recent news reports have shown that industrial poultry farming is a cesspool of infection and sickness and the birds are excessively dosed with antibiotics. This, of course, is not surprising. We’ve known for a while that chickens are reared in the most horrific conditions and are subject to all kinds of cruelty from the time they hatch till the time they’re converted into chicken biryani. Unfortunately, nothing is going to change very soon because industrial farming serves an extremely valuable function – it keeps, meat and egg prices low. 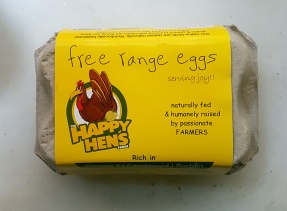 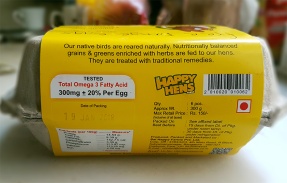 The Happy Hens (HH) eggs are quite expensive. A pack of six costs Rs 150 which works out to Rs 25 an egg; at Rs 66 for 6 desi eggs work out to Rs 11 (it can go up to RS 15-16) while industrial eggs at Rs 36 for 6 works out to Rs 6 an egg. That effectively works out to four regular eggs for one egg from a HH. However, for those eating desi eggs it’s not as much of a jump. As you can see in the image below, desi eggs are approximately 35% smaller than both the regular and HH eggs and if you take the weight into account HH’s are only 50% more expensive.

The price difference, explains Marappan, is due to four factors. First, he only uses indigenous species. After some experimentation, they found the most suitable breeds for the topography were the Kadaknath, Gramapriya, Kaveri and Aseel cross. One advantage of these breeds is that they’re more responsive to birds of prey so his losses to predators are much lower than commercial varieties. However, they are not very good layers and produce only 150-160 eggs a year which is about half the amount of industrial birds.

Along with being cage-free, Happy Hens maintains green pastures for the birds to forage and maintaining this green cover is costly.

Also, apart from their natural diet, the birds receive organic omega flaxseed cake supplements. HH did come out with a Rs 100 six-pack version initially, but found that the omega-3 version at Rs 150 received a better response. They also tried sourcing from backyard poultry farmers to keep prices down – the ones who supply desi eggs – but they found challenges in traceability and were unable to guarantee the freshness of the eggs.

And finally, HH has priced their eggs keeping 25% retailer margins in mind.

While HH has about 6000 birds of their own, the farms double up as training and research facilities. Since last year they’ve begun working with farmers on a franchise model where the farmers are trained, provided with feed, chicks and veterinary support. However they’ve only chosen to work with farmers who have at least 4-5 acres of land, believe in organic-farming and are hands-on in the operations.

Compared to commercial eggs terms both the desi and HH eggs are far superior in taste, though between the two the difference is marginal. The yolks are a deep orange compared to the feeble yellow, in terms of texture they are thicker and less runny and the flavour is far more intense. On a scale of 1 – 10 with ten being most intense, commercial eggs are a 3-4, compared to an 8 for the HH. The other thing I noticed, and perhaps this is related to the density of the yolk, is that for the same cooking time and heat, the proportion of runny to cooked yolk is much higher in desi and HH eggs.

I didn’t try making anything else with them, so I can’t say how they’d taste scrambled or boiled, or in bakery products. However, given the quality of the yolk I’m pretty certain it would result in a much richer product, especially for a mayonnaise or a lemon curd.

On a daily basis, HH eggs would be unaffordable for the home cook, but I think they are warranted for days when you want to treat yourself. However be warned, once you eat these eggs going back to industrial eggs is not easy.