At a time when Irani cafes are disappearing from Mumbai, ​it’s heartening to have a new one open. Café Irani Chaii – the two i’s stand for India and Iran – doesn’t have a fancy décor, isn’t trying to recreate a lost era or reinvent the genre. It’s just a simple, old-world Irani café run by Dr Mansoor Showghi Yezdi, an old-world Irani Muslim. 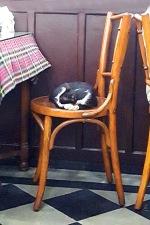 The interiors of the 32-seater are familiar: stained wood walls with mirrors, large glass jars of sweets at the counter and a plain stone-tiled floor. The family photographs hanging behind the counter are of Yezdi’s father and uncle; no make-believe family tree here. Café Irani Chaii, despite being just a few months old, already has a weathered, well-aged sheen. A wooden board with the iconic list of things you mustn’t do: No Fighting, No Cheating, No Match Sticks, is perhaps the only decorative feature.

The bespectacled Yezdi doesn’t take the ‘No Talking To Cashier’ bit seriously. He greets you when you enter, popping by several times through the meal saying, “You’re not our customers, you’re our family,” with a big smile. A posse of stray cats saunter in and out, stopping to receive a scratch from friendly customers or curl up and nap in one of the brown bentwood chairs. 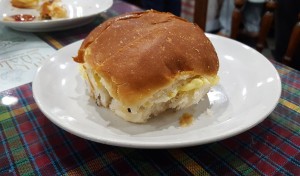 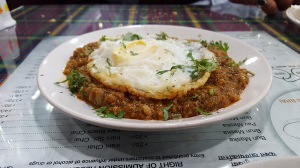 As with most Irani cafés it’s possible to have a full meal at Café Irani Chaii, but you could just as well pop in for a quick bite. A good place to start is the classic crusty brun or the soft bun maska with Irani chai. Ours came with a generous, artery-clogging layer of maska, after Yezdi, unhappy with amount of butter being spread by the waiter, took over. The bread is plain, simple and freshly made. The chai was hot, milky and sweet.

Mutton kheema is another Irani favourite and we ordered ours topped with a half-fry egg. The egg, crisp and lacy with a runny centre, is centred on the slightly sweet kheema that’s flecked with peas and garnished with freshly chopped coriander. The akuri, with caramelised onions, tomatoes and flavoured with mixed spices, though was a little overcooked, under spiced and under salted.

The mutton paya more than made up for the disappointment. Thick and heavy, the soupy gravy has a divine peppery kick and, with a brun pav, is meaty enough to be a meal in itself. We pack the mostly uneaten chicken white biryani: the white rice is too dry and the chicken masala has an overpoweringly unpleasant taste of fried red chilli powder.

Apart from the 10% discount for schoolchildren, cyclists get 10% off for ‘helping preserve the environment’, as do customers who ride up in a Bullet motorbike (Yezdi’s favourite bike).

You don’t need discounts to entice you to this charming new Irani; the food is simple, honest and extremely affordable, and the service quick and hospitable.