But the partner-in-dine was adamant.

‘We’re going to the Urs,’ she said firmly and decisively.

And I’m really glad I went.

The 10-day annual Urs (festival) held at Mahim in honour of the saint Makhdoom Ali Mahimi attracts huge crowds and throws the arterial road connecting Mumbai to its western suburbs into complete chaos. Mahimi, after whom the area is named Mahim, was a 15th century scholar-saint who was accepted by both Hindus and Muslims.

View from the top of the Ferris wheel 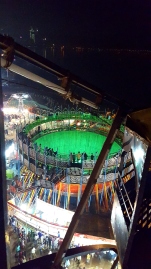 The well of death

Like all big fairs, it has multiple attractions: ferris wheels; the well of death where, perched on one of the ferris wheels, I saw a Maruti chasing a motorcyclist; toy trains,; sundry seated contraptions that flung you in different directions; stalls for games of hoops; a horror house and plenty of sweet vendors and food stalls. Nothing is unique: the sweet vendors are selling the usual petha, kadio bodio, aam papad and assorted laddoos. The food stalls have seating areas and sell mostly street foods like baida roti, rolls, kebabs, khichda and biryani.

The original ball of dough

The paratha and halwa are sold by weight

A sudden rush of customers at the counter

What I had never seen before, but which I’m sure will be quite easily available in parts of central Mumbai was the paratha and halwa. A common combination from north India, particularly UP, the parathas are freshly made, gigantic and sold in smaller pieces together with the bright orange sooji halwa. The minimum order is 250 gm, but there were quite a few customers who bought it by the kilo. After trying out the greasy combo, I’m convinced that the sole purpose of these foods is to serve as vehicles of fat and sugar. And on a cold winter morning in north India that’s exactly what you need, but in balmy Mumbai, where most of us lead sedentary lives, it’s a killer.

I also tried a beef pulao: the rice was very flavourful and had picked up the flavours of the whole spices, the fried pieces of meat were quite tasteless.

If you’re not religious it’s still worth visiting the Urs at least once, just as it’s worth visiting the Mt Mary festival in Bandra, or going to Mohammedali Road during Ramzan. There’s no good reason to return – specially not for the food. I hope the partner-in-dine  feels the same way.

One reply to “A night at the Urs”