The Palanpur Food Festival, which was held at Tuskers, last month, gave me a good reason to visit the sole restaurant at the Sofitel, BKC that I hadn’t visited before. While the spread at Pondicherry Cafe, the all-day dining restaurant, is always enticing, it’s Jyran, the underrated North West Frontier Indian restaurant that blends North Indian flavours with French elegance, which is my favourite. Tuskers, the pure vegetarian restaurant created keeping in mind the Gujarati diamond traders operating from the diamond bourse next door, has had a voyeuristic appeal for me. I’m not interested in the restaurant per se but I was curious to know what kind of restaurant would appeal to the richest community of Indians. 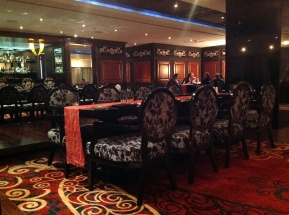 With dark, stained wood panelled walls and floor, thick carpet and heavy drapes Tuskers has the feel of a dining room in very exclusive old boys’ club. It’s a far cry from the light, casual atmosphere that typifies most new restaurants and nothing like what the name conjures up for me: a dak bungalow, or a rest house where hunters in sola topis and big guns like the Great White Hunter from Jumanji stopped to take a break while on shikar. On the menu I’d expect dishes dating back to the Raj like Railway mutton Curry, Mulligatawny, Country Captain Chicken and Trifle Pudding.

Tuskers is the completely opposite.

It takes its name I am told from the largest and gentlest of herbivores – the elephant. The elephant motif appears quite incongruously on a panel running along the top of the walls of the restaurant and on some of the furnishing. The menu is strictly vegetarian and produced under the watchful eye of Jankidas Vaishnav, the Maharaj who ensures the food retains its traditional flavours.

The recipes for the Palanpur festival, Vaishnav, who is also a Palanpuri, were adapted from the community cookbook Dadima no Varso, told me. I found that interesting since chefs are loathe to share the origins of their recipes preferring to suggest that the recipes came from extensive research in the region and not from a single source. But Dadima no Varso, the self-published Palanpuri Jain cookbook, which I was able to acquire thanks to fellow food writer Rushina Munshaw-Ghildiyal is an extraordinary cookbook. The book in which the recipes are written in Gujarati on one page and in English on the other is perhaps one of the most exhaustive recipe books of a community whose food is almost impossible to come by.

The meal began with some simple starters of Methi Ni Bhaji which were fenugreek dumplings in besan (gram flour) batter; Mogra Dal Ki Kachori, a moong dal mixture filled kachori and Vatana Na Ghugra, a folded over samosa with a green pea and dry fruit filling. Nothing exceptional.

From the main course, the Saragrami nu Besan, drumsticks cooked in a besan (gram flour) curry was outstanding. The sauce-like gravy was tangy and thick almost to the point of being glutinous with a rich flavour of drumstick. Equally divine was the Trevedi Dal made with mogra dal, masoor dal and tur dal which had a lovely deep garlicky flavour. 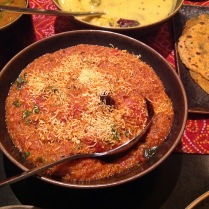 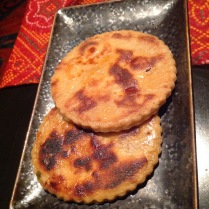 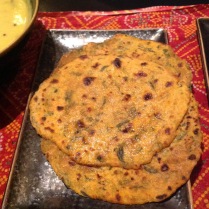 Both the breads and the tamatar nu shak were decent, but unremarkable.

Despite being somewhat full we made space for the Badam No Sheera which with a thick coat of ghee screamed calories. We couldn’t resist the soft, grainy sweet and teaspoon by teaspoon guiltily ate as much of it could.