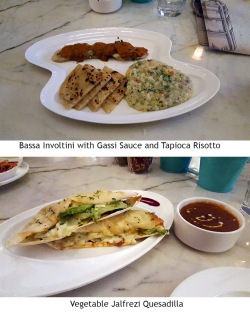 I always thought that no matter what you did to basa it would always come out soft and moist. That was until I ate the bassa involtini, with gassi sauce and tapioca risotto, at Bombay Vintage. The fish, wrapped around vegetables, was as dry and wiry as toothbrush bristles. The thick, ragu-like gassi topping was a fine rendition of the fiery Mangalorean curry, but the accompanying tapioca risotto, a main course dish, was a tasty, glossy porridge that would be better suited to a breakfast menu.
At Bombay Vintage, the food lurches between two extremes; it’s either disastrously inedible or thoroughly enjoyable. Fortunately, there’s more of the latter than the former. At a time when most restaurants are Modern Indian clones, it’s nice to find one that’s going against the tide by doing old-fashioned fusion — reasonably well.
Take the vegetable jalfrezi quesadilla, for instance. The mixed vegetables in a thick, moderately-spiced jalfrezi are stuffed into pita-like tortilla pockets and served with daal makhani, a hearty combination of the familiar with the offbeat.
That’s equally true of the chicken missal pav mini meal. A clever play on chicken korri roti and missal — the spicy, thin, chicken usal gravy is poured over a bed of crisp Mangalorean korri roti and farsan. It’s creatively served in a brass tiffin and portioned out in brass bowls, possibly to emphasise the vintage in the restaurant’s name.

The bar is equally successful. The over-sweet green apple rock martini was remedied by an attentive bartender, who instantly sent over lime to inject much-needed tartness. A perfect balance of sweet, sour and salty, the bubbly kokum fizz mocktail is ideally suited to the Indian palate.

Bombay Vintage’s dessert section is weak and indifferently plated. The volae bella, the best of the lot, has a delicate caramel-coffee flavour and a heavy caramel custard-like consistency. However, you can’t taste the palm jaggery — supposedly the main ingredient. The shahi tukda-inspired mascarpone sandwich is a disaster; we left the amateurish, tasteless triangles, topped with rabdi on a squiggle of chocolate sauce, mostly untouched.

Whatever your thoughts about the food, you cannot but help love the eclectic atmosphere of Bombay Vintage. Over-the-top kitsch mingles with easy nostalgia. Every trope is accounted for: an air conditioner concealed to look like a vintage radio, film posters next to beedi ads, a picture of Netaji next to a photograph of Queen Victoria, sepia-toned pictures of colonial Bombay. Waiters in peon’s uniforms serve water from over-sized aluminium teapots.

Bombay Vintage is a fun place, attractively priced and with attentive service. Figure out your favourites on the menu and you’re bound to return.
WHAT: Bombay Vintage

COST: Rs 1700 for two including a cocktail each

One reply to “Restaurant Review: fusion flavours of Bombay Vintage”

To the two mutts who make pillows out of freshly washed clothes, scratch my upholstery, steal my sheets when I get up to pee in the night and take up half the bed.
Slightly Debauched Scrambled Eggs
What's in a name?
I haven’t quite made up my mind about these aged Negronis at Sette Mara @stregismumbai which are the only classic versions of the cocktail on the Middle Eastern kitchen and lounge’s signature Negroni menu.
When you haven’t eaten out for a while there’s a higher expectation of that first meal. It’s not enough for it to be good in itself, it has to make up for those lost meals and be like boni for meals to come.
Sometimes, a new recipe simply evades you. No matter how hard you try it just doesn't produce the right flavour, or texture.
About a week ago I brought Sahxy nee Sakshi, from @wsdindia.
I've been wanting to make an Egg Salad Sando for a few weeks, but wasn't sure if anyone was making Shokupan, or Japanese milkbread in Mumbai.