One of the most popular dishes at the newly opened Fatty Bao, the Asian gastropub in Bandra, is the Fatty Oyster. The oysters are served on the shell. You scoop out the oyster with its toppings, take a bite and wait for the layers of flavours and textures to hit your palate. There’s the tarty crunch of the breadcrumbs topping mixed with lemon zest, the sharpness from the ponzu, the saltiness of the plump oysters and then, there’s the unmistakable smoky pungency of chorizo.

Chef Manu Chandra’s Asian twist to the classic chorizo and oyster pairing may be the newest dish in the city featuring this spicy sausage, but it has been quietly appearing on restaurant menus over the last couple of years.

Next door at Monkey Bar, which opened three months ago, it appears in the form of a Goan Chorizo Pao and Goan Chorizo Pot Rice. The Bombay Canteen in Lower Parel has combined elements of the South African bunny chow with the Goan chorizo pao to come up with the Bunny Pao: a filling of chorizo, Malabar spinach and broad beans inside a cylindrical loaf of bread. 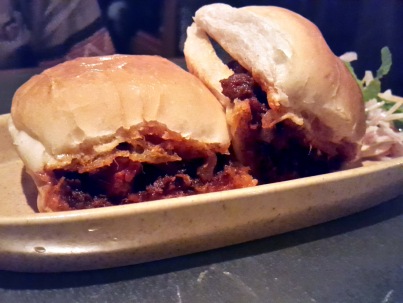 At Social, Salt Water Café, Smoke House Deli and The Tasting Room, it features in some form or the other on the weekly specials menu. “It’s our go-to ingredient,” says Gresham Fernandes, group executive chef, Impresario, who sometimes uses the oil for flavouring, or the meat itself in stews, and as a filling in the Spanish omelette or in a chorizo risotto. Perhaps, the most popular dish in this genre is the Chorizo Rice at Imbiss (Bandra and Colaba). “We sell almost 40 plates of Chorizo Rice a day during the week and more than double that number on weekends, at each outlet,” says Peter Maowing, the owner of Imbiss.

Back in time
So, what is the chorizo and why is it suddenly so popular? While chorizo is the name of a spicy Spanish sausage, in India, it is used interchangeably for Spanish chorizo as well as Goan sausages, or chorise (pronounced cho-reez), the Indian version of the Portuguese chouriço. Sharing the same bloodline as the Spanish chorizo, and the blander Portuguese linguica, Portuguese chouriço were flavoured with garlic, Port wine, black pepper, sugar, cayenne pepper and paprika. However, this proved to be too delicate for the sturdy Indian palate. These mild flavours were sharpened by the addition of spices and flavours like turmeric, palm feni, ginger, cumin, palm vinegar, cinnamon and cloves.

In Goa, two kinds of chorise are produced: the homestyle, or rosary sausage, commonly found in South Goa where individual masala-coated, dried pieces of pork are wrapped in casing and are sold by the piece. For the commercial variety, many pieces of meat are pressed together to form a longer sausage, which has a thicker casing and is sold in sealed packets making it easier to transport. Rosary sausages tend to have less fat and since they’re flavoured with coconut vinegar, they tend to be significantly less sharper than the synthetic vinegar-flavoured commercial sausages. Both are equally spicy.

Imported Spanish chorizo was found on restaurant menus more than a decade ago, particularly during the sudden boom of Spanish restaurants in the city. Caliente, the city’s first Spanish restaurant that opened in 2002, served it as part of its tapas selection. Trattoria, at the Taj President (now Vivanta by Taj), used it in its Paella. However, changing FSSAI (Food Safety and Standards Authority of India) regulations, about five years ago, resulted in imports being held up and unpredictable supply. Most restaurateurs dropped chorizo from their menu, though a few switched to Goan sausage.

Why the interest?
The interest in chorizo has been affected by three important changes in consumer’s tastes. Firstly, millenials and hipsters have embraced pork in all its forms with a passion bordering on obsession. Almost everyone agrees that there’s been an exponential rise in pork consumption across the country. And while people can’t stop talking about and eating bacon, there’s also been a subtle shift from prime cuts (like chops and ribs) to offcuts and offal. Simultaneously, the kind of restaurants that have opened in the last few years in Mumbai and other cities has changed.

The new restaurants, says Chandra, have shifted “from an aspirational, fine cuisine-driven space to a more comfortable, robust flavour-driven space.” Diners don’t care as much about fussy, beautiful plates with exotic imported ingredients; they’re happy to experiment with local produce, but what they want is clever dishes with strong, simple flavours. All of this has been helped by increased travel to Goa, which for most people, has been transformed from a leisure to a weekend destination.

Of course, chorizo, by itself, is rather endearing as Goans have known for years. Chefs love chorizo because it’s a versatile ingredient that marries beautifully with other ingredients.  Diners love it because it ticks off all the right taste boxes: fatty, salty, spicy and smoky. As Fernandes says, “Once you eat chorizo, there’s no turning back.”

One reply to “Why are chorizo sausages popping up across menus all over the city?”