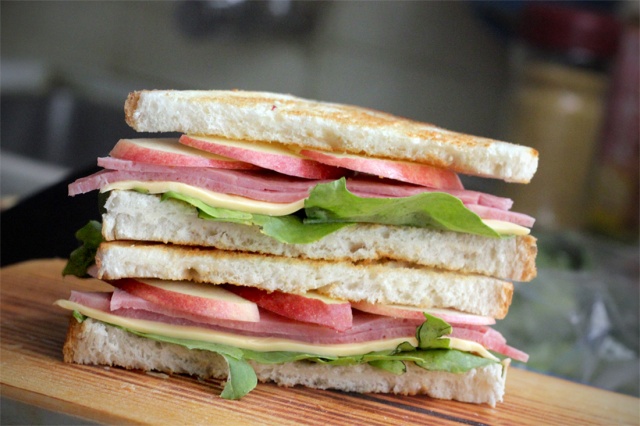 I knew what I was going to do with the apples even before I hung up the call from the rep from Washington Apples. One of my favourite sandwiches is my ham, cheese and apple sandwich. It’s a simple sandwich that is based on three well-established combinations: ham and cheese, apple and cheese and, ham and apple.

I’m going to take credit for coming up with it on my own since I first made it in the pre-internet days; as I’ve subsequently discovered there are many versions of it and so I can’t claimed to have invented it. This was the time when the net-wrapped, Chinese apples started entering the market. The sweet, crunchy Himachali apples were still available at that time but people had just started experimenting with these fascinating imports. For me these larger apples were a perfect substitute for tomatoes.

While the Chinese apples (and I have no idea what variety they were) were convenient I’ve always been curious about which apple work best with the sandwich. So much of last week was devoted to eating ham sandwiches, each one made with a different apple except the Gala which I dismissed quickly: too soft.

The Granny Smith expectedly turned out to be too tart, the Red Delicious too sweet. The Honeycrisp brought a welcoming crunch but not so much flavour.  Of the remaining, the Cameo and the Cripps Pink produced the best result though I preferred the slight tartness of the latter to the sweetness of the former.

This is an everyday, no-fuss sandwich that doesn’t require any gourmet ingredients, it’s actually better without them. I use a decent quality cooked ham, in this case from Alf’s, Brittania cheese slices; the only exotic touch is the arugula which is my favourite salad leaf. If you want to spice it up a bit, I’d recommend Tabasco, but not Sriracha – the tartness adds an unpleasant note

METHOD
Arrange the arugula leaves on one slice of toast. Place the cheese slice, followed by the ham and the apple.
Close with second slice of toast.
Cut on the diagonal.