This has been a year of great meals for me. These three stand out over the many others.

Ottimo, ITC Gardenia: I have no reservations in saying that the best Italian meal I’ve had in my life has been at Ottimo. While other Italian restaurants are caught up with ideas of provenance and tradition, Ottimo takes on a completely novel approach to Italian food. Chef Vittorio throws caution to the wind as he tricks the eyes and the palate with a refreshingly new style of presentation and plating.

My first course, Just like Tuna, had me confused — blood-red looking pieces of meat coated with sesame seeds, served with plum-looking sauce and chopsticks was what I’d expect from the hotel’s Japanese restaurant Edo. It was a trick. The ‘sashimi’ turned out to be perfectly cubed, compressed watermelon and the sauce, a balsamic reduction. Next up was an ice cream on a stick arranged on a carved block of ice. The ice cream, however was a balsamic and foie gras ice cream! Unfortunately, after the foie gras ban, Chef Vittorio had to remove this gem from the menu. Spaghetti with tomato and cheese is ubiquitous; when you’re served the Sorrentina sphere at Ottimo, you get a big crusted ball on a soup. Cut the mozzarella ball and out tumbles a spaghetti pomodro with basil that’s hidden inside.

Alamgir, Lucknow: Tunday Kababi may be the most famous restaurant in Lucknow, but if you want a really good Lucknowi meal, skip the tourist magnet and hunt for Alamgir. Bang opposite Tunday, hidden in a narrow pathway between two buildings, with no easily visible signage, you really need to hunt for Alamgir. I wouldn’t have bothered if it hadn’t been recommended by Chef Imtiaz Qureshi, the man who put Lucknowi cuisine on the global map. 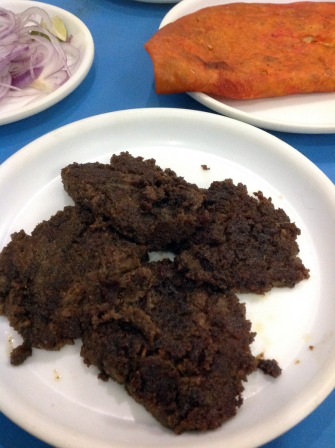 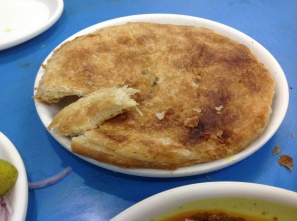 I didn’t find better kebabs and breads anywhere else in Lucknow. The gilawati kebab here is soft and smooth as a pâté. You can taste the spice but you just can’t feel it. They go perfectly with the orange-hued sheermal. Normally, it’s the main course that gets all the attention but what surprised me at Alamgir was the kulcha. I have never eaten kulchas that were so light and had the flakiness of a puff pastry. The excellent meaty, glistening with oil, nalli nihari, I was eating it with didn’t stand a chance against the kulcha.

Janaseva Bhojnalay, Pune: Mumbai may be the hot bed of Maharashtrian politics but if you want great Maharashtrian food, then you need to head over to Pune. One of the best home-style, vegetarian thalis I’ve eaten was at Janaseva. Like most thali establishments, there’s not much by way of décor. The dining room is basic and functional — three rows of 4-seater, laminate-topped, bench-tables run down the length of the well-lit room. The food was simple, but incredibly tasty. We were served a black sesame thecha, a simple lovely varan, a bitter-sweet fried bhindi and coconut, a sweetish pumpkin bhaji, amazingly soft chapattis and a really nice preparation of chawli. Needless to say, we had several refills.

One reply to “The year in 3 dishes”